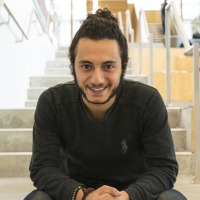 As a new Vantage Arts student, Excellence Award recipient, and already the First Year Representative for UBC’s Arts Undergraduate Society (AUS), Maryo Wahba from Egypt is wasting no time in settling into university life. Here he discusses the importance of diversity and an international approach to education, as well as his growing interest in diplomacy.

What motivated you to choose UBC's Vantage One program?

When it came to studying abroad, I felt there were two major countries to choose from – the USA or Canada. Being Arab and given the political situation in the States, I naturally shifted more towards Canada — it generally seemed like much more accepting nation to live in. Then when I started to research the kind of lifestyle to expect here, I was even more interested.

I was specifically interested in UBC because of its excellent reputation, high rankings, as well as its diversity. I had spent my final two years of high school at international school in Germany, named the United World College Robert Bosch College, where there were 200 students from 100 different countries, so it was important to me to continue this international approach to education.

I was also drawn to UBC’s balance between academic and extra academics – the idea of going to an Ivy League school for instance, where all I did was study, would have sent me crazy. I needed a space to get involved in activities outside of the classroom.

Then a UBC representative came to my school to promote UBC’s various programs. When I asked about the admission requirements, he explained that I didn’t meet the minimal English requirements but suggested Vantage College as an alternative route in. I did some research and found that Vantage is much more than just a platform to study UBC course content without needing the same level of English skills – I was interested in the additional level of care that students get.

I heard that direct-entry English classes at UBC have as many as 350 students in them, whereas the maximum number of students per class in Vantage is 60, which is amazing because it means you have so much more direct interaction with your professor and TA. It’s an amazing ratio that allows for much more interaction and one-on-one support.

I also liked the more gradual approach to preparing you for university life that Vantage offers students, who are coming straight out of high school.

What have been the major benefits of doing this pathway program?

First and foremost, the interaction I get with my professors and the access to amazing resources. It’s not just in class either, I can visit them during their office hours for extra support. I’ve found that during these drop-in appointments you have really constructive conversations — they actually get to know your name and they send you extra research and resources outside of the class readings just because they know you’re interested in a particular topic. The one-on-one interaction is so enriching in so many ways.

I also find that the international approach to study and working alongside a multitude of different cultures is another really interesting aspect of Vantage.

The academic program itself is also very well rounded, it really takes in both academic English and non-academic English, simultaneously enhancing our English language skills as we learn the course content.

What has been the biggest challenge you've faced here?

I must say there is one predominant culture group within the Vantage program, which in some cases might lead to feeling a little excluded, since people who are from similar cultures instinctively tend to form social groups within themselves.

Another drawback is that we have six courses a semester, that’s 32 credits, which is more than what a direct-entry first-year student would normally take on. Also, the program structure is unique in that it spans over three terms — we do the summer session as well — which means 11 full months of study with only one month break before going into second year. It can be quite intense for some people.

What has been the biggest surprise at Vantage?

I must admit I was not expecting the friendliness of the professors. Personally, I’d really like to thank Vantage for their excellent selection of teachers. Coming to university with weaker English can often lead to insecurity as a student, you really need a well-trained professor to deal with such language barriers and insecurities, but every single one of the professors who teach me deal really well with this unique challenge in the classroom. They’re all very friendly, very approachable, very encouraging and understanding — I certainly expected much more firm personalities.

In particular, Professor Simon Lolliot who teaches psychology, is one of the most inspiring people I’ve met in my life. He makes fun of himself in almost every class and if ever there’s a question he doesn’t know the answer to, he’ll happily invite students to his office to research the answer together, or he’ll go out of his way to research things he’s unsure of and will email his findings to whoever asked, even when it’s outside the class topics. He’s had such a profoundly positive impact on my studies that I’m now considering doing a minor in psychology, which was not part of my original plan.

What are you planning on majoring in?

Originally, I wanted to major in Political Science, but now that I’ve had classes in various areas I want to major in International Relations. I’m a bit more indecisive when it comes to choosing a minor, I’m interested in either Sociology, Anthropology, Psychology, or Theatre. They’re four very different areas so I’m really hesitant to commit to one just yet because I change my mind every two days.

In terms of my career path after UBC, diplomacy seems to be where I want to go.  My childhood dream was to be a United Nations General Secretary, which may seem a little silly right now but I am still interested in getting involved with the UN. I enjoy studying big policies, I enjoy learning about diplomacy.

How do you feel about transitioning into second year?

I feel I am much more prepared to go into second year having been a part of Vantage, compared to if I was thrown into the wider UBC community immediately. I also feel good knowing that the same professors who teach in Vantage also teach direct-entry students, so I’m getting the exact same education.

Where is your favourite place to study on campus?

Recently I’ve really liked using the Vantage Commons space. I like that there is a variety of sections depending on how you feel, like there’s the more formal, very quiet area at the back of the Commons, then there is the more relaxed, slightly more chatty area where you can sit with friends and quietly ask your peers questions if you have any. It’s a versatile but productive atmosphere for whatever study environment I need.

Where is your favourite place to eat on campus?

Since Vantage is centred in Orchard Commons, I definitely go to Open Kitchen the most. I really love the Custom Kitchen there, where you can choose from lots of different vegetables and meats, which they turn into a stir fry. It’s healthy, tasty, and economic.

In all of Vancouver, where is your favourite place to visit?

Well before moving to Vancouver, I’d spent the last couple years in Germany, which has very distinct historical architecture. So, when I came here I found the modernity of the Downtown area very interesting, especially the skyscrapers and fancy glass buildings, because I am not used to it.

I also really enjoy going to the beaches here to chill and relax. I especially love English Bay in town, it’s so beautiful at sunset.

What advice would you give to new Vantage students?

There seems to be many people coming here who have a fear of being a bit excluded from the rest of the UBC, but that’s just not true. There are so many opportunities to connect and make friends with direct-entry students. For instance, I live in Place Vanier, one of the student residences on campus, and there are students from all over campus there.
Also, most Vantage classes take place in Orchard Commons, which is a building that attracts a lot of other students from different faculties, so there’s definitely not this limited circle of interaction within Vantage.
There are also so many student clubs available, which are great for making new friends. I’ve actually been elected as the Arts Undergraduate Society (AUS) First Year Representative across all of UBC, so that was a very big victory. I certainly plan to remain involved with student unions and club activities.

I think some people considering Vantage also get the wrong idea and look down on it, but believe me, my friends who are direct-entry students wish they were in Vantage. They envy me for getting to be in such small classes and getting such a huge amount of care and interaction with my professors, which is reflected in my grades compared to theirs. Even though they are better at English than me – some are even native speakers — I’m getting higher grades not because I am any smarter than them, I’m just getting a better level of care and attention to fully understand the course content. It really does enhance your education and makes it a lot easier to flourish and get the best grades you can.